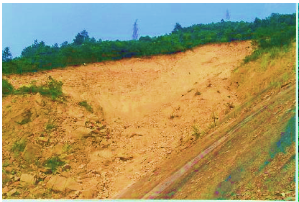 The location, in the vicinity of a hydro-electric power station in south China, suffered a serious landslide in 2000.

Feng Ziyuan was contracted to repair the damage using vetiver. Four years later (2004) he returned to find native plants and shrubs growing profusely. In 2008 the person in charge in formed Feng Ziyuan that native shrubs and trees had covered the site and that no further slides had occurred – the site was stable.