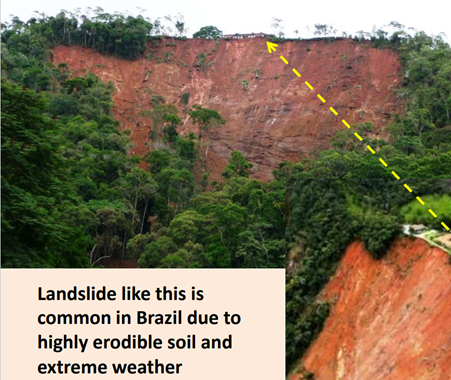 Climate change consequences and land mismanagement, when combined, can result in serious disasters, this is particularly so in high rainfall tropical locations. The most devastating are concentrated water flows at times of extreme rainfall events resulting in landslides, flooding, infrastructure destruction, loss of life and serious reduction in economic output. Similarly, the aftermath of earthquakes often results in unstable and highly erodible slopes that slip and end up as major sediment flows in downstream catchments. The Vetiver System can provide significant mitigation in the prevention and rehabilitation of such damage, including the stabilization of slip prone shallow slopes, soil erosion control, levee and dike stabilization, riverbank stabilization, road and highway stabilization, bridge abutment stabilization, and the stabilization of building sites. The Vetiver System’s effectiveness has been proven including the protection and stabilization of highways in El Salvador against the impact of the 1998 Hurricane Mitch; the protection of a key railway line in Madagascar against annual cyclone damage that previously shut down the railway every year for months on end; the protection of sea dikes in Vietnam against the worst typhoons in 50 years; and the stabilization of highways in China, Malaysia, and Vietnam against slippage due to tropical rainfall events. These and other examples are well documented on this web site.

In selecting critical areas of disaster mitigation, the following are considered where vetiver can be best used to reduce potential damage, they are landslides prevention and repair, rehabilitation of degraded land, watershed protection, coastal protection, and riverbank protection.