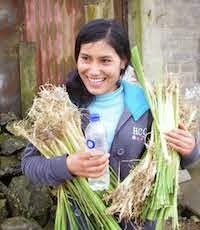 In most cities, towns, and villages in developing countries there is no connection to a public sewage/waste water treatment.  Where there is a connection the effluent is often discharged without treatment to near by rivers. Where there is no sewage system some properties may have septic tanks, and the majority of these leak and mis-function.  The result is that water tables, water bodies, and the local environment are polluted with consequential increases in foul smelling air, undrinkable water, and increased water borne diseases.  One such an example, described in a World Bank report on Indonesia describes the city of Palembang, South Sumatra, with a population of over a million having no direct sewage connections, and 70% of the households having septic tanks, of which 30% mis-function.

Correcting this situation with conventional costly technologies for Palembang, and tens of thousands of other urban centers in the tropics will be prohibitive and will take decades. It is essential to start installing low cost, flexible, and sustainable remedies, that might not be perfect, but are able to reduce the problems significantly.

The Vetiver Phytoremedial Technology (VPT) as developed by Paul Truong is one such solution.  It works, it is scalable, and can be installed in many cases by the user.  Planting vetiver around a septic tank would reduce much of the effluent and leakage; planting a vetiver hedge around the boundary of an urban garden would reduce rainfall runoff and the contaminates that it carries; planting vetiver around a miniscule urban lot would do the same, and might provide some privacy too!; and planting vetiver along the banks of urban drains would help remove contaminates and reduce the high levels of nitrates and phosphates that enter the drainage system from urban runoff. These are just a few of the benefits.

Alois Kennerknecht of Peru has shown us how one man can change the thinking of residents of part of Lima (30 mm rainfall/year!) and is in the process of re-greening the area with vetiver. If you look at his photos you will see that, apart from re-greening, vetiver reduces erosion, reduces dust, reduces waste water flows (photos 59 to 65 show specific urban household waste water treatment applications), and provides forage and material for composting. A similar approach and more could be used for urban waste water management. In any such an approach the stakeholders (the city/block residents) have to be involved – they have to want to live in a cleaner environment – most of them do!  It has to be a bottom up driven process.  Of course local governments should help.

Its all about “vision” and involving those impacted with this growing problem of managing urban waste.  More on VPT can be found on our website.