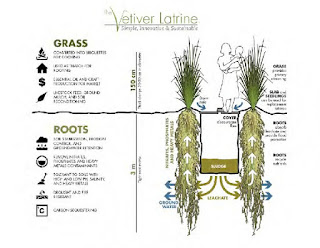 Millions of dollars are being spent on improving public sanitation.  Most is expensive and will only reach just a few communities – those living in rural areas get little or no help. Even in most cities in the developing world many of the poor are without any sanitation. Very low cost solutions are needed.

Remember this paper from Owen Lee. Here is an update from Owen on the progress of his project:

“Those of those who are not familiar with the vetiver latrine. About one third of the global population does not have adequate access to a simple toilet. Logically it is the poorest of the poor that does not have this basic necessity and because they cannot afford them. The idea is to reduce the cost of a latrine by using vetiver as a construction material instead of bricks and cement. The design is a simple slab with vetiver planted around. The roots of the vetiver will stabilized the pit and the blades will act as a privacy screen. Using this technology we have been able to reduce the cost of a latrine from about $500 to about $25. Considering that most Haitians make less than $1.25 a day that makes sanitation affordable. If you are interested please check out this site.
Now the update: We finished another 247 latrines in April 2013 giving a total of 362 vetiver latrines. I did a survey of about 30% of the household of the batch that was completed in Sept 2012.  After 2.5 years of use: (a) The latrines are self cleaning, 100% of the latrines were clean; (b) 0% of the latrines were mis-used (this is a common problem when NGO build latrines that are better than the homes they become storage depots and not latrines) (c) 100% of the households were satisfied with the latrine (d) none of the latrine pits collapsed; (e) people were very happy with the privacy screen; (f) of those who originally built a non-vetiver privacy screen 80% did not have one 2.5 years later. They said it was too much work maintaining a privacy screen and that the vetiver did a fine enough job; (g) when I visited the village in Nov 2014 all the latrines had only vetiver as a privacy screen.
There were no morbidity records before the project so it is difficult to quantify the public health benefit of the project. What we can say is that when there was a cholera outbreak in the area, the village was not effected (Sanitation usually affects the spread of cholera not the initial infection). Anecdotally number of child deaths due to diarrhea has been reduced (we used to have one death every 2-3 months and for now people can’t remember a child death from diarrhea for 15 months and counting). We are looking into making the latrine more potable so that it can be produced in a centralized location and transported to remote sites”.

Congratulations Owen, and to the smart villagers of Haiti. More proof that you don’t need big bucks to improve quality of life! Owen is looking for additional funding to extend the program.