Skip to content
Home › The Vetiver System and India – It takes a generation!

The Vetiver System and India – It takes a generation! 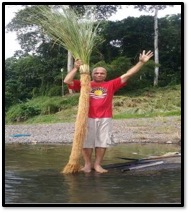 A recent quote from a senior official in West Bengal India:

“Soil erosion is one of the largest environmental issues facing the earth today; and the river banks region of India, with heavy rainfall, is particularly affected. Erosion devastates infrastructural activities- landslides, erosion by river and flood water take heavy toll of developed infrastructure. From an engineer’s perspective sustainable asset management has posed as a gargantuan task because of soil erosion. Traditional hard engineering is now found to be inconsistent with the three pillars of sustainability – economy, social and environmental. Hard engineering interventions to prevent erosion have been attempted over decades in the region, incurring large financial and environmental costs, and with limited success. This in combination with limited State budgets makes finding an alternative, low cost, environmentally sustainable solution imperative. One such method that shows considerable promise is Vetiver grass.”

30 years ago (a generation ago) John Greenfield and I, when working for the World Bank in India, re-introduced the Vetiver Grass Technology (VGT) as an alternative to the engineering approach  – the latter did not work very well – too expensive, heavily subsidized, badly maintained, and mostly ineffective.  We were not very popular for promoting vetiver grass hedgerows as components of World Bank funded projects (Indian Watershed Projects in Andhra Pradesh, Karnataka, Maharashtra, and Madhya Pradesh States) as an alternative and better technological and economic solution; questions were tabled in the Indian Parliament in New Delhi, some people even wanted to ban the technology!

Well, as you can see from the above quote, we have come a long way from those days, thanks to a new generation of professionals and the pressure created by climate change and social needs that demand alternative, effective and lower cost solutions.

Since those early days in the 1980s  VGT has been applied in many countries for many different applications that are collectively called the Vetiver System (VS). The expansion of VS has been enabled by countless individuals and institutions that have embraced the technology, seen and understood its effectiveness, simplicity and wide range of application, and who have contributed magnificently to quantifying its effectiveness, developing new techniques, and sharing the results to users world wide.

Paul Truong, TVNI’s technical director and major contributor to the development of VS, was recently in India and met with users in both the private and public sector in Tamil Nadu and West Bengal. There are some interesting developments including river bank stabilization at large scale in Nadia – https://www.vetiver.org/IND_Sabujayan_Nadia.pdf – District of West Bengal; an initiative to treat waste water from a private sector dairy processing business; cleaning up and treating village pond water in West Bengal; and the potential for using VS to maintain and stabilize sea walls in the Sundarbans of West Bengal.  Truong’s report can be found at this link: https://www.vetiver.org/TVN_Truong_India_trip.pdf

Elsewhere in India VS is being used more widely for mine rehabilitation and infrastructure stabilization (roads, railways, waterways amongst others).

Two new areas for VS application should be of interest.  Prime Minister Modi has vowed to clean up the Ganges River – VS could have a very useful role in reducing untreated industrial and community waste water from entering the river. The other is linked to health. India has to find ways to manage the impact of indiscriminate deposition of human excrement.  Existing solutions are generally expensive and many have not been effective.  The use of vetiver to treat effluent from toilets and septic systems has proven to be effective at large and small scale – as too have simple vetiver latrines that were introduced to Haiti.  I am sure that some modification will be needed, but a vetiver solution is possible, and well within the means of execution by the local communities themselves., underscoring the fact that VS is a very useful technology to help build community resilience for mitigating climate change and social/economic problems that relate to soil and water.

It is also good to know that the Indian Vetiver Network is to be institutionalized and located at the Tamil Nadu Agricultural University in Coimbatore where there is a renewed commitment to bring VGT to India’s farmers for soil and water conservation applications. (an idea that was initiated a generation ago!).

I have great confidence that India will continue to accelerate its application of VS, not only because Indians are interested in the technology and in a plant that has its origin in India and one that is deeply embedded in her culture, but also because to survive the environmental changes brought on by climate change, India has little option but to use and embrace this unique plant.
Dick Grimshaw