Skip to content
Home › The Role of Hedgerows in Agriculture

The Role of Hedgerows in Agriculture 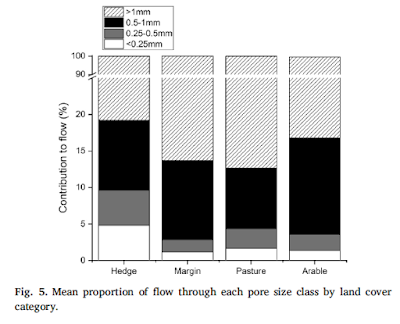 Woody hedgerows have played a vital role in English agriculture for centuries. Originally planted to primarily demarcate land holdings and to contain livestock movement  and side benefits not fully understood until recently following studies undertaken as a result of alarm for the rapid removal of hedgerows in the period since World War II. A paper “The role of hedgerows in soil functioning within agricultural land (2019)” by a team from Leeds University exposes some of the many soil related benefits linked to hedgerows.

“Intensification of agriculture has led to major losses of hedgerows and field margins worldwide. Soil sample extraction, in situ time series of soil moisture, temperature and soil water quality analyses, annual earthworm sampling and arbuscular mycorrhizal (AM) fungi sampling enabled comparison of soil functions between typical hedgerows, grass field margins, pasture and arable (mainly winter wheat) fields in a temperate, lowland setting. Mean bulk density (upper 50 cm), surface compaction and soil moisture content were significantly lower while organic matter content and pore water dissolved organic carbon concentrations were significantly greater in hedgerow soils, than margins or fields. Mean nitrate and phosphate concentrations were three and ten times larger, respectively, in soil solutions under hedgerows than arable fields while ammonium concentrations were least in arable fields. Saturated hydraulic conductivity was significantly greater under hedgerows (median=102mm hr−1) where it took an average of one hour longer for soils to reach maximum moisture content following rainfall, than adjacent arable (median=3mm hr−1) or pasture fields and margins (median=27mm hr−1). Hedgerow soils had a greater proportion of flow through micropores and less macropore flow than other soils. The pasture and margin soils had the largest proportion of macropore flow (> 85%) and more (and larger) anecic earthworm species, such as Lumbricus terrestris which produce vertical burrows. Earthworm density, biomass and diversity were greater in pasture and margin soils, followed by hedgerow soils, and tended to be lowest in arable soils. For both total and AM fungi, hedgerow soils hosted a distinct and heterogeneous soil community, margin and pasture communities were diverse but clustered together, and arable communities formed a distinct cluster, with low inter-sample variation and significantly lowest AM fungal richness. The findings demonstrate that soils under hedgerows, which should be conserved, can provide important functions on farmland including storing organic carbon, promoting infiltration and storing runoff, increasing earthworm diversity and hosting distinct AM communities.”  Full paper at: https://www.vetiver.org/UK_HoldenSoilbiohedge2019.pdf

“Both hedgerows and grassy field margins can provide a wide range of enhancements to soil function that may provide wider ecosystem service benefits to accrue from agricultural systems. Given that global food security is a pressing issue and more intensive farm production may be required in some regions, it will be important to develop simple land management strategies that can enable food and fibre production to occur in a sustainable way. Enhancing the area of both field margin woody hedgerows and grass strips globally could be an important technique for reducing flood risk as well as for enhancing total soil C storage and the diversity of soil ecosystems across agricultural landscapes. One trade off that requires further research is the potential of hedges to capture pollution from the atmosphere which may result in reduced water quality in runoff and groundwater flow emerging from soils below hedges.”

I find this paper interesting in that the positive benefits from woody hedgerows (as well as grassy field margins as grown in England) replicate many of the benefits shown in vetiver grass related research, particularly those aspects relating to the role of soil micropore, rainfall runoff reduction and the slow down of flooding, the high arbuscular mycorrhizal (AM) fungi, and enhanced soil carbon storage.  Although not specifically addressed in the paper, well managed English hedgerows when planted across the slope act as formidable soil retention barriers as any one can see when taking a walk along a hillside hedgerow where the difference between up slope and down slope can be as much as 3 or 4 feet — just as we find with vetiver hedge barriers.

This paper reinforces the need to plant dense vegetative barriers (hedges) along farm field boundaries in our efforts to mitigate climate change and intensified agriculture. Under small farm agriculture in the tropics, where landholdings are extremely small, vetiver “hedgerows” make ideal boundary barriers, and when properly managed, take up minimum space, have an infinite lifespan, and provide many secondary benefits.