“The Father of Vetiver” 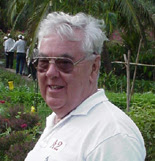 “The Father of Vetiver”, John Greenfield died at his home in New Zealand on February 25 2017. John often reminded us that as agriculturists we had only 30 to 40 seasons to attempt to make significant change during our professional careers. He certainly succeeded in doing so, and today tens of thousands of people in the tropical world have benefited from his insights and actions on soil and moisture conservation and the application of the Vetiver System. He was a very practical hands on agronomist and conservationist whose work was always well based on science. He understood what he saw, and was able to create practical common sense solutions from those observations. We know him affectionately as “The Father of Vetiver” – and he is well known to many people through the simple hand book “Vetiver Grass – A Hedge Against Erosion” – a handbook that had to fit in the shirt pocket of a farmer! and one that has been translated into countless languages.  I personally knew John since 1985 when he came to work with me in India. He became a good friend and colleague. We had many great times together in India, and after, from a distance promoting the Vetiver System around the globe. His was not a wasted life, but one of action, one that will continue to impact for a very, very, long time into the future on many thousands users of the Vetiver System in many different ways. John was always looking to help the world’s small rainfed farmers. The best tribute to him would be for those people working with and advising this group of farmers, to make greater efforts to introduce the Vetiver System and the very unique plant that it is based on. Those who work with small farmers might like to read this: ALLEVIATING POVERTY IN THE THIRD WORLD — THIS IS ALL IT TAKES!
Emerging from John’s “Vetiver Grass Technology” based soil and water conservation focused work has been, in recent years, a series of bioengineering and phytoremediation applications that could have a profound impact on our environment at this time of climate change.  Our thoughts are with Sandra (his long time partner) and his children.