Skip to content
Home › Stabilization of a 2000 km highway in Vietnam. The vital role of the Vetiver System.

Stabilization of a 2000 km highway in Vietnam. The vital role of the Vetiver System. 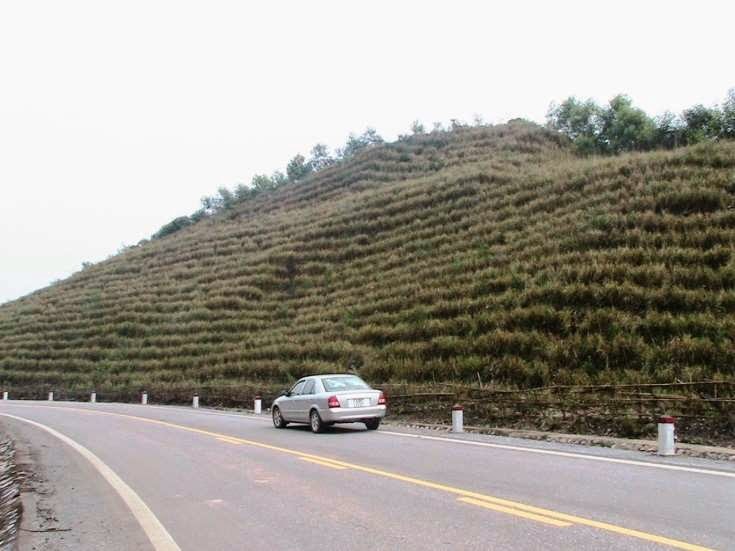 Recently Paul Truong revisited sections of the Ho Chi Minh Highway, Vietnam, that have been stabilized with Vetiver System applications. He prepared this photo essay that shows the impact of VS over a fouteen year period. (2000 – 2014).  We are indebted to Van Tran and Van Man (former and current Vetiver Network coordinators in Vietnam for some of the photos and the incredible work that was performed on this highway that follows the alignment of Vietnam’s famous Ho Chi Minh Trail.

The work and impact of these VS applications have to be considered, with the test of time, successful. There were some slips (1 meter and 10 meter deep) that VS could not prevent, even so the overall results were excellent. Contrary to views of some critics the Vetiver System: (a) protected slopes of over 60%, (b) protected slopes against very high rainfall, (2000 mm per year) including extreme events under typhoon conditions, (c) provided a microclimate that allowed native plant species to naturally establish and eventually shade out the vetiver to the extent that in 2014 there is little evidence of vetiver in the earlier plantings – NOTE where native species did not establish vetiver continued to grow and protect the slopes, (d) resulted in a much reduced investment cost (estimated at 90% of hard engineering solutions), and minimum annual maintenance costs, and (e) proper engineering design assures even better results of VS application as a stand alone technology or in combination with hard engineering technology.

The experience on this highway confirms that VS could be applied widely for slope stabilization in developing countries where climate permits and where labor is relatively cheap.  It also confirms the need for good engineering design.