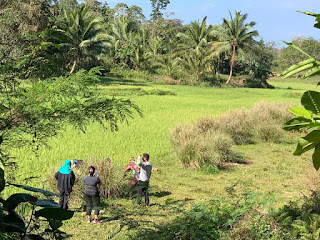 The following are observations by Vetiver) users given  during a 1996 community workshop at Matalom, Leyte, Philippines. Note in this part of the Philippines vetiver is known as “Mura” or “Mora”. (Prepared by , Program Field Coordinator, FARMI, ViSCA, Baybay, Leyte, Philippines).

Leon Pen, Barangay Chairman, Templanza, Matalom, Leyte…..”I got my first Mura (Vetiver) planting materials from one of my barangay councilmen Jacinto Gerona. I planted Mura in my farm near my house. Mura is easy to plant with minimal maintenance. It grows very well and effectively controls the down flow of soil during the rainy season. At present, the contour plots of my farm have been leveled off. In addition, I am also using Mura to cure high blood pressure in my work as Tambalan (local medicine man). The only comment I have with Mura, is that my carabaos (water buffalo) do not like to eat it”. (If you cut your Mura regularly, say once a month, your carabaos will love it…Ed)

Irene Pria, Officer: Rural Women Association, San Salvador, Matalom, Leyte…….. “FARMI workers gave me the Vetiver planting materials in 1991. At the start (about the first 2 years of establishment) I did not practice trimming the Mura hedgerows. Then I found out that it is very strong and effective in controlling soil erosion. Now my Mura hedgerows are well maintained by trimming before flowering. Trimming the plant (during not before) is laborious because the stem is already hard. I placed the herbage along the upper portion of the hedgerows. This will help in trapping the soil during the rainy season. Other herbage is used as mulch for my sweet potato crop. I could also say that the wonderful contribution of Mura has ever given me is that it cured my thinning hair. Note: Workshop participants and friends testified that Irene really suffer balding/serious thinning of hair before. She has the formula/technique of doing it which she will share to those who are interested.

Gertrudes Inderio, 67 years old woman-farmer, Altavista, Matalom, Leyte……. “I was the first one to adopt the planting of Mura in my barangay (village). I noticed that my contour plots have leveled 3 years after I planted Mura. I really believe its effectiveness in controlling erosion. It is easy to plant and maintain. To maintain it, I just burn the hedgerows at the end of summer and in less than 5 days regrowth is already visible. I have proven it myself that Mura grow in any type of soil. I have planted 6 lines of Mura in Anapogon (calcareous soil) and it is growing very well”. Note: Nang Itring’s farm has a 25-40 degrees slope.

Nemesia Purgatorio, President, Women Association, Elevado, Matalom, Leyte……. “My farm may not be as hilly as the farms of other farmers but still I notice how effective Mura is in controlling soil erosion. Once established, it is not easily killed by cogon grass (Imperata cylindrica) unlike other contour hedgerow species. Mura is easy to maintain. It does not grow anywhere except in the contour line where it is planted. I trim my Mura before planting corn or sweet potato or during land preparation. I am also using Mura as roofing materials for my Payag (animal shed).”

Rubelio Mazo, Punta, Baybay, Leyte……… “In my experience Mura is not effective unless we use the A Frame in locating the contour line. Trimming is also very important. Mura should be trimmed before planting corn or camote to avoid “awong” (sunlight competition). If left untrimmed, there could be danger of accidental burning of the matured hedgerows when crops are still on the alleys. The herbage scattered along the hedgerow base also help in preventing the passage of soil during rainy days. Try to visit my farm, I am sure you will notice the difference between farms with Mura and farms without Mura hedgerows.” 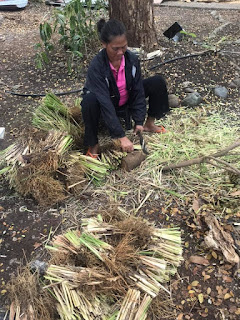 Santiago Llones, Punta, Baybay, Leyte…….. “I like Mura because it is easy to establish and maintain. I do not practice trimming but instead burn my hedgerows because I observed that Mura grows more vigorously after burning. I do not believe that soil fertility is affected when Mura hedgerows is burnt. The effect of Mura could be seen in the healthy corn along the upper portion of the hedgerows. Mura does not compete with corn in sunlight and soil nutrients”.

Norberto Inderio, MAFUD President, San Salvador, Matalom, Leyte…….. “My contour farm is near (above) my small rainfed rice field. I have no doubt of Mura’s effectiveness in controlling soil erosion. There was a big gully in my farm before but after 4 years of planting few lines of Mura that gully is no longer visible. The only thing that makes Mura unattractive to farmers is that it seems unpalatable to animals except during long dry season when grasses are scarce. During that 7 dry months in 1992 burned Mura was not able to recover. Mura serves as a wind break of my rice and also serve as a nest for my hens. Mura should be trimmed to keep away the Maya birds from nesting on it.” Note: Maya is that small red-brown bird which is considered important pest by rice farmers.

Ronie Maso, Punta, Baybay, Leyte………. “I observed that farmers in the barangay who do not use Mura as a contour hedgerow frequently shifted farms. For me I have not shifted farms for already five years. The reason why they won’t plant Mura is that they don’t own the land they tilled. One observation I have with Mura is that it is easily dominated or overgrown by Kudzu especially if not well-managed.” (Development planners, please note the importance of land tenure, or lack of it, with regard to the uptake of longer term conservation technologies; also as we have mentioned before, vetiver hedgerows combined with other practices may be the answer to “slash and burn” problems. Ed.)

Margarito Maso, Punta, Baybay, Leyte….. “I firmly believe that planting Mura grass is the most effective way to control soil erosion. I made a simple experiment on my farm by leaving a portion not contoured with Mura. In just few cropping seasons the difference in terms of soil erosion was already evident. I measured about 2 feet thickness of soil trapped at the upper base of the Mura hedges. Gullies are observed in the uncontoured portion.”

Felipe Itallo, Punta, Baybay, Leyte…….. “My experience with Mura is on paddy rice fields and not on upland farms. We have already been using Mura to stabilize rice field dikes several decades. It is really strong and lasts forever. It regrows even if covered with mud. Farmers just burn the Mura after harvesting to drive away rats and birds.

Bonifacia Gura, Matalom, Leyte……… “In the beginning we used rock walls as soil erosion control system in our farm. Along the rock walls we also planted Ipil-ipil (Leucaena leucocephala). After several years we eradicated the ipil-ipil because their roots are making land preparation difficult. During that time FARMI introduced Mura as contour hedgerows to control erosion. So I tried the grass as replacement of Ipil-ipil. We like Mura because it stays where it is planted. It is easy to establish and survives long droughts. One major characteristics of Mura that makes it an ideal control hedgerows is that it regrows or produces roots at the nodes making it effective as contour bands and riser stabilizer”. (This latter observation is execellent, and is exactly why Mura is such an effective stabilizer…Ed.).

Concepcion Pada, San Salvador, Matalom, Leyte……… “I have not maintained (trimmed) my Mura hedgerows since planting because I fallowed my farm for 5 years. However, I noticed that the grass still exists after 5 years since it was planted. Now, my Mura hedgerows is already thick. I am planning to open my farm again and trim the Mura”.

Nesias Galia, Hitoog, Matalom, Leyte……… “My farm is located below the barangay (village) road so that during heavy rains water is drained to my farm creating big gullies. As remedy, I formed contour bands and planted Mura and Napier along the bands. I observed that corn planted near the Mura produced bigger ears than those near the Napier. Napier roots runs through the alleys. The Mura hedgerows could be maintained by just cutting it at the base or stem regularly. It should be cut and cleaned regularly so that weeds such as Bokot-bokot (Micania cordata) can not dominate that would eventually kill it.”

QUESTION:  FROM THE ABOVE RESPONSES ONE WOULD HAVE THOUGHT THAT MOST FARMERS IN THE PHILIPPINES WOULD 25 YEARS LATER BE USING VETIVER?  WHY AREN’T THEY?