One of the consequences of climate change is that rainfall events are often less frequent and more intense.  During the 1980s a series of studies relating to vetiver grass and soil and water conservation were carried out by Dr. G.M. Bahrad of Akola University in Maharashtra, India. Here is a summary of some of that work;

Drs. G.M. Bharad and B.C. Bathkal from PKV University in Akola, Maharashtra, India have provided the Network with another season’s data on the impacts of vetiver grass hedgerows on soil loss and surface runoff.

Referring to Figure 1, in all plots the majority of the soil loss occurred in year 1 (68% – 79% of the totals) with a substantial proportion of that loss coming from one storm event; year 1 was an unusually wet year. The numbers on top of the histograms are the total three year soil losses and the blue areas represent the soil lost in the one major storm event in year 1. As illustrated here, the adequacy of a soil conservation treatment must be judged not on the “average” event but on performance during exceptions to the average. 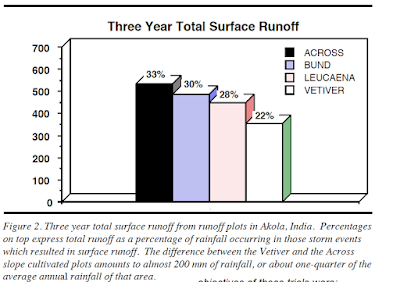 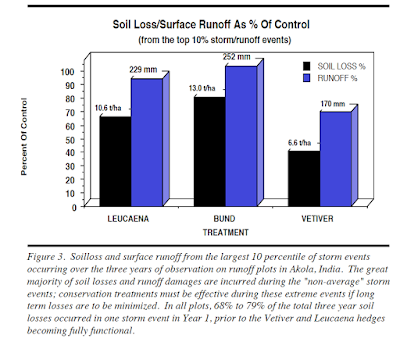 Figure 3 is a followup on the comment made above regarding performance of conservation treatments during the extreme events. This figure represents the data from the top 10% largest storms over the three years. These storms also

NOTE THAT THE HIGHEST LEVEL OF  RUNOFF IS FROM THE GRADED BUNDS.  CAN FARMERS AFFORD TO UNNECESSARILY LOSE THIS AMOUNT OF WATER?