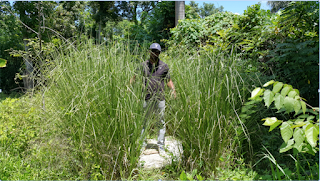 In 2016 while doing community development work in a rural farming region in Haiti, I became aware of the serious sanitation problem.  Open defecation is the norm and diseases such as Cholera are active.  The locals suggested building a single community latrine for them, but I soon learned that wouldn’t work.  The traditional latrines are made from cement block which is not easily transported to a region like this, where there is no road access.  I learned from other organizations, that even if I could build one, it was not a real solution.  The “community latrine” is too far from most homes to actually get used regularly.  Plus since it is not owned by anyone, it is also not cared for by anyone.  In fact, in many communities the cement structure is so far superior to normal buildings that it is repurposed as a storage depot.

The real solution is to build household latrines.  But as a small nonprofit that is focused on regenerative agro-forestry, Global Freedom Project was not able to build a standard cement latrine for all of the families here, which the materials alone cost at least $250.  Luckily I discovered the work of Owen Lee, who a few years before me had encountered the same problem in Haiti and solved it by building the vetiver latrine.  After some back forth communication with him, I was able to get the idea of how to make this ultra inexpensive biological pit latrine myself.  The cost for materials alone, can be as low as $25!  If you want a detailed guidebook that explains how the latrine works and how to make your own, go this link and you’ll find it translated in multiple languages:  https://www.global-freedom-project.org/resources/. 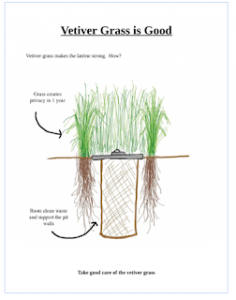 Over the course of 3 years I was able to train a team of skilled workers how to install these simple, yet effective “toilets” as they are called in Haiti.  We set a goal of making about 300 and succeeded.  Midway through this project, I reported an update here:  https://vetivernetinternational.blogspot.com/2019/05/the-vetiver-latrine.html, where I discuss some of the modifications the people made, so that the latrine was more acceptable.  I also talked about the biggest challenge I faced, which was a lack of recognition of the importance of the vetiver grass.  Some families pulled the grass slips out and planted ornamental plants.  Others removed them and build a privacy shelter.  In other cases, the kids trampled the grass beyond recognition.  In all cases, the biggest problem was that the families were unaware that this was potentially a major problem.

Vetiver grass serves multiple important purposes.  The roots stabilize the pit walls, so no concrete blocks are needed.  The roots also digest the waste and as leachate passes through them, it is cleaned.  The grass hedgerow that matures in the first year, makes a thick privacy wall that really does keep prying eyes away.  To help convey these important messages, I created an infographic in Haitian Creole that the installation team could use to educate families before they built the latrine.  That simple action solved the problem.  When families realized their latrine pit risked collapse without vetiver, they took efforts to protect it.

I have considered reviving this project, but have hesitated due to the lack of a clear goal for the next step.  Even with the first project there was supposed to be a defined community of about 300 families, but as we reached that predetermined number, I realized there was always another neighbor next door.  I felt that although the recipients loved their toilets, they didn’t appreciate the amount of efforts needed to make this a reality for them.  I wasn’t sure how to make this project more sustainable and ensure the recipients participated more.  Recently I got inspiration from another project that specializes in household water filters.  They have found that charging a small fee (the equivalent of about $5 USD) for their $100 filters, substantially improved how well the family cared for that item.  The chances that the filter, once paid for, was still operating years later were much higher.  I believe this would be true for the vetiver latrine as well.

Another change I am considering, is devising an elevated a precast cement toilet seat, which could be attached to the slab that covers the pit.  That was the most common modification made by families during the first project.  Some elderly people are not able to use the toilets without them because of bad knees.  The combination of paying a small amount for the latrine and adding an elevated seat would likely increase the longevity and popularity of the vetiver latrine.

It is my wish that someday the people of these communities become more empowered and rise above their current challenges.  Maybe in this lifetime they can have access to running water at their homes and have flush toilets, in which case the vetiver latrine will become obsolete solution.  But in the meantime, it’s important to have an immediately available solution.  Diarrheal illnesses are active and the basics such as clean water, sanitation and healthy nutrition are the foundation for which further progress can be built on.  I am happy to have discovered an answer to at least one of these problems and hope that it becomes a more widely used form of sanitation in Haiti and elsewhere. 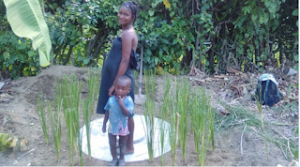 We constructed 365 “vetiver toilets” and had only two failures. The failures were due to the pits filling up with water before completion, before the vetiver had been planted and the concrete tops put in place.