Skip to content
Home › Flood control, groundwater recharge and erosion control. The Vetiver System can mitigate all three at the same time.

Flood control, groundwater recharge and erosion control. The Vetiver System can mitigate all three at the same time. 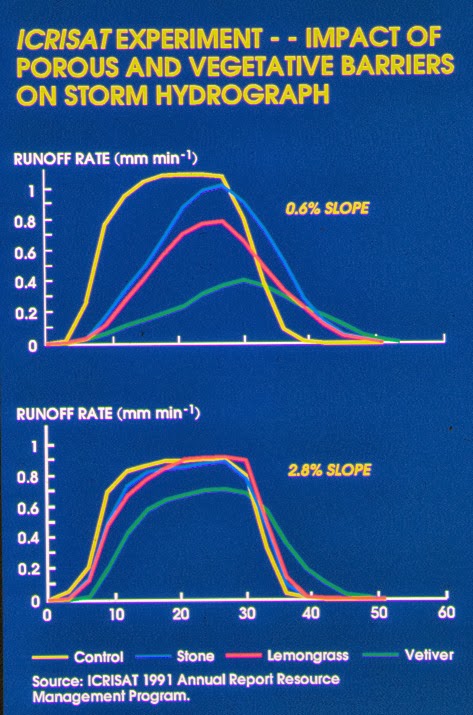 The Guardian has an interesting article by George Monblot titled “Drowning in Money: the untold story of crazy public spending that makes flooding inevitable”. In summary he links the huge amount of money that is spent in the United Kingdom on flood protection in lowland areas, with little effect, to the similarly large sums of money that are provided in the form of subsidies to farmers to increase field size through the removal of hedgerows and trees (deforestation) from upland areas and hill farms. Some folks are starting to see better ways of dealing with these issues. Quote ” …. One day a government consultant was walking over their fields during a rainstorm. He noticed something that fascinated him. The water flashing off the land suddenly disappeared when it reached the belts of trees the farmers had planted. This prompted a major research programme, which produced the following astonishing results: water sinks into the soil under trees at 67 times the rate at which it sinks into the soil under grass (shallow rooted grass pastures — Ed). The roots of the trees provide channels down which the water flows, deep into the ground. The soil there becomes a sponge, a reservoir which sucks up water and then releases it slowly. In the pastures, by contrast, the small sharp hooves of the sheep puddle the ground, making it almost impermeable, a hard pan off which the rain gushes”.
I know England well, I was born and schooled there.  I have walked the ancient hedgerows of western England. Guess what – wherever there are hedgerows soil has stacked up behind them creating areas for infiltration and reduction in severity of the flood hydrograph (i.e. flood water is reduced and released at a slower rate).  Where the hedgerows have been removed there is no such slow down and we see the result in the red sediment laden streams and dirty near land sea water.
In the US at the Neal Smith National Wildlife Refuge (NSNWR) located in Prairie City, Iowa, experiments are being conducted to see how deep deep rooted prairie grasses when planted in strips on arable land will amongst other attributes reduce runoff and improve water recycling.
Those of us who work with vetiver grass have known for years that when planted as a contour hedgerow vetiver will significantly reduce rainfall runoff, will positively influence flood hydrographs by reducing, and slowing the release of potential flood water from upper watersheds, and will almost block all eroded soil from moving down the slope, and at the same time will reduce actual erosion by reducing the concentration and velocity of runoff.

So lets have a look at some of science behind this phenomena when it comes to vetiver barriers:

Storm Hydrograph – The 1991 experiment by the International Crops Research Institute for the Semi-Arid Tropics (ICRISAT) subjected vetiver hedgerows to induced storm events comparing vetiver with lemon grass, stone barriers, and bare soil.  Note the vetiver and lemon grass were less than a year old, and therefore were not as dense as mature hedges. Even so vetiver produced the most reduced runoff rates.  It was a pity that ICRISAT did not repeat this experiment with older more dense hedges. Note the increased effectiveness on the shallower slope.  One can conclude that its just as important to use vetiver barriers on flat land as it is on steeper land if flood water from upper catchment areas is to be slowed down. Field experiments by Paul Truong on the Darling Downs, Queensland are examples where vetiver proved to be very effective when floods occurred, but failed to attract the attention of policy makers.

Why does a deep rooted barrier (vetiver) work so well? – There have been a number of studies focussing on vetiver and groundwater recharge. Deeseng et al (2006) found that “The results showed that runoff accounted for 3-13 % of rainfall at study sites while vetiver hedgerows reduced runoff by 19-56 %. Evapotranspiration, soil-water storage, and deep drainage accounted to be 33-67 %, 0-14 %, and 31-65 % of rainfall respectively. The vetiver hedgerows increased groundwater recharge by as much as 20 %.” and “…. Vetiver can reduce surplus runoff by diverting it perpendicularly along the contour hedgerows and allowing smaller amounts to pass through, while other amounts are seeped (diffuse) through the soil and retained by soil profile.”  Hussein et al (2007) focussed on the backwater behavior behind hedgerows and concluded:  “that at low slopes and subcritical flow rates 60.001 m3/m s, a vetiver grass strip retarded flow producing a backwater. This caused settling of the inflow sediment, with up to 94% being deposited upslope of the grass strip. Backwaters were higher and shorter as slope increased”. Overtime the slope behind the vetiver barrier, as a consequence of the build up of sediment, becomes shallower, further extending the backwater and sediment deposition as in this image of a 30 year old hedge in Fiji.  An enlarged backwater area will increase infiltration, but it would appear that its real value is as a spreader of water across the slope and temporary water storage prior to fairly rapid infiltration (preferential) at the hedge itself (see below).
Groundwater recharge. – In a fascinating and excellent paper:  Modeling Ground Water Recharge Under Vetiver Hedgerows (2011) – K. Vinod Kumar provides an interesting assessment of where and how water infiltrates on vetiver protected slopes ….”While vetiver roots may age and disintegrate to form vertical macro-pores, it is the surface of the roots themselves that provides a high Facial Area Density for regions under a vetiver hedgerow. The Facial Area Density can be related to the Root Length Density. For vetiver this surface is vertical and long. Hence the phenomenal capacity of vetiver hedgerows to increase ground water recharge can be attributed to the high vertical surface area provided by the vetiver roots for film flow. The shoot parts of the plant, start the film flow from the surface water and the myriad long vertical roots of vetiver, connected to the shoot, seamlessly transfer the water as surface film at a fast rate to the deeper regions….” He concludes “… Preferential flow as laminar film on the surface of roots of vetiver can account for the capacity of vetiver hedgerows to increase ground water recharge. The backwater formed by the dense hedgerow allows diffusion and preferential flow to continue to recharge even after the rain has stopped. It is better that the backwater is emptied fast. Otherwise, further rain will disappear as runoff. It is the preferential flow that reduces the time to empty the backwater.” Kumar paper is summarized in this presentation.
The bottom line is that: preferential flow has 5 times capacity to increase infiltration; backwater and absorption are important; and the older and thicker the hedge increases infiltration proportionately. To optimize infiltration and reduced runoff/flooding, hedges should be spaced 5 times the thickness of the hedge apart – for a meter thick hedge, hedgerows should be 5 meters apart.