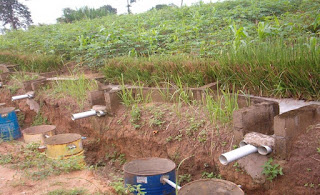 Climate change is already creating more intense storms – floods; and less rain and higher temperatures – drought. It will get WORSE. We need to become very much more active in finding solutions that can easily and inexpensively be applied. We have written many times about the Vetiver System for soil and water conservation, and now is the time to step up its application particularly in the warmer areas of the world. The verified facts are that the Vetiver System’s use of the  unique plant, Vetiver grass, results in: (1) significant reduction in soil loss, (2) significant reduction in rain fall runoff, (3) reduced soil fertility loss, (4) improved groundwater recharge, and (5) improved crop yields and incomes.
The latest research comes from a Nigerian paper
, “Using Vetiver Technology To Control Erosion And Improve Productivity In Slope Farming” by Efiom Essien Oku, Emilolorun Ambrose Aiyelari, Kwabena Owusu Asubonteng; published by United Nations University Institute For Natural Resources In Africa (Unu-Inra).  These trials were undertaken on 45% slopes in southeastern Nigeria where the rainfall exceeds 1,000 mm per year and the soils have high acidity and have been disturbed by cultivation with high soil, water, carbon, and plant nutrient losses, leading to significant reduction in crop yields.
“This study assessed the effectiveness of vetiver buffer strips in mitigating degradation on a landscape of 45% slope. Vetiver Buffer Strip (VBS) planted at intervals of 5m, 15m and 25m surface spacing were compared to each other and also to usual farmers’ practice (FP) as the control. Twelve erosion plots, each measuring about 50m long and 3m wide were used. The plots were planted with traditional mixture of maize (10,000 plants ha-1) and cassava (30,000 plants ha-1). Pre and post-experiment soil properties including bulk density, organic carbon, nitrogen and phosphorous, exchangeable bases were determined in the laboratory. Runoff, soil loss, crop yields and rainfall were also measured. Of the total soil loss in 2010, 70% was from FP, and VBS at 5m, 15m and 25m respectively was 4%, 14%, and 12%; and 2011 78%, 3%, 10% and 9%.  In 2010 rainfall lost as runoff was 29%, 7%, 12% and 13% under FP and VBS at 5m, 15m and 25m respectively; and the corresponding loss in 2011 was 21%, 8%, 10% and 11%. Crop yields were significantly higher under VBS plots. Yield declined in the second year under FP whereas it increased under VBS plots. When compared with FP plots, maize yields increased by 55%, 27% and 32% in 2010 under VBS with 5m, 15m and 25m spacing, and in 2011, it increased by 89%, 69% and 68%, with the same interval spacing respectively. Cassava yields increase under VBS at 5m, 15m and 25m by 76%, 47% and 41% respectively in 2010. The corresponding values for 2011 were 289%, 206% and 188%. Carbon loss in eroded sediment were 91%, 41% and 21% lower under VBS at 5m, 15m and 25m spacing respectively, than under FP in 2010; and in 2011, where it was 300%, 177% and 84%. Nitrogen loss was also lower under VBS at 5m, 15m and 25m by 80%, 28% and 29% in 2010 respectively, and in 2011, the values were 175%, 120% and 57%. Vetiver buffer at 5m interval significantly reduced runoff, soil losses and increased yields of the crops under study. In addition, vetiver showed dual potentials in climate change adaptation and GHGs emission mitigation, sequestering carbon and nitrogen and enhancing water use efficiency when compared with FP”.
“Planting of vetiver grass on the contour 5m apart can effectively decrease soil and nutrient losses and sustainably increase agricultural productivity. Additionally, it holds the capacity to sequester carbon and nitrogen that would have escaped into the atmosphere as carbon dioxide (C02) and nitrous oxide (N20) contribute to GHGs emissions.” The full paper is at: https://www.vetiver.org/NIG-soilcon.pdf
This research used Chrysopogon nigritana – a species of Vetiver that is native to many countries in Africa, and although the plant is fertile it is not considered aggressive or invasive when grown under upland conditions.
These results are in line with other Vetiver experimental results undertaken in the wet tropics. It is particularly important for countries with small and poor farmers to find suitable technologies that remedy the issues that they face.  The Vetiver System is one of them.
Dick Grimshaw