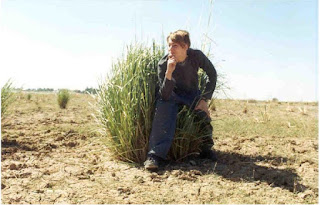 More on Chrysopogon nigritanus.  I have continued investigations into this species of vetiver – common name ”Black vetiver”. It is found in nearly all sub-saharan African countries generally in association with river flood plain and seasonally flooded areas. For example the peripheral  areas of the Kafue River flats in Zambia, and the flooded areas of the Niger and Senegal rivers of West Africa. Its main uses include medicinal, freshening drinking water, thatch, handicrafts, forage (when young after burning), and farm boundary marking.
It appears only to propagate naturally from seed in these permanent/semi-permanent waterlogged areas.  Outside of such areas seeds either do not germinate or die after germination, and if used domestically the plant is propagated through slips.
The species appears to be retreating. Tony Cisse who farms near Dakar, Senegal only grows C.zizanioides descended from Chris Juliard’s importation (ex South Africa) initiative (1990s). He writes “Traditionally the most common use for C.nigritanus in Senegal has been for the roots that are added to drinking water. This is the common way people recognize the plant and its name in local languages. Whereas it would seem logical that it should be grown locally, there is now very little evidence of this. Vetiver roots are imported from neighboring Mali, and sold in small bundles. I have heard it was used in the past (possibly over 60 years ago or more) to demarcate fields, but I have never seen nor heard of it growing naturally, at least in the western areas of Senegal.  Reasons for this are likely to be associated with climate change and the drop in annual rainfall. There are very few areas that can be designated as flood plains, and standing water and ponds are generally very rare if they exist for more than a few weeks at most during the rains, and so this could account for this absence, although still present in Mali. The water table in much of Senegal is below the reach of vetiver roots. It is possible that there are parts of Eastern or northern Senegal along the river where the right conditions for C. nigritanus exist, but I have not been there to observe”.  In Nigeria and other African countries, where new dams have been constructed, the downstream flood plains are no longer flooded and wild vetiver seems to be a diminishing component of the ecosystem.agriculture, climate change, erosion, forage, invasiveness, slope stabilization, wastewater

Sterile non invasive C.zizanioides remains the preferred choice for all Vetiver System applications. Even though Nigerian research does support C. nigritanus for erosion control and phytoremediation applications note C. nigritanus has NOT been tested for steep slope stabilization and virtually no work has been carried out to identify many of its characteristics – depth, tensile strength, shear strength of its roots; pest control properties, forage value, and others) I would recommend its use for erosion control and phytoremedial applications where it is a native plant, and then only after exhausting all efforts at locating and propagating C. zizanioides. In either case propagation has to be by clump division, so it would be best to use the superior and well tested C. zizanioides particularly where country wide programs are developed and where many nurseries will be required.

Further research on C. nigritanus should be encouraged. Trials might well identify many more characteristics similar to those of C. zizanioides and may also better delimit areas where it is most suitable for application. Both species are very closely related and appear to behave rather similarly. Determining those differences would reinforce future recommendations.