Burkina Faso is located in the Sahel zone. Soil erosion control measures have been emphasised on physical techniques like earth and stone bounds, small dikes and vegetative barriers. These techniques have succeeded but their realisation is limited by the work hardness and especially by the lack of stones in the long term. A trial held in the north and centre zone of Burkina allowed to evaluate the suitability and adaptability of Vetiveria zizanioïdes to be established in hedge rows. Two local species, Vetiveria nigritana and Andropogon gayanus have been associated for comparison. Theirs capacity to insure a good fixing of stone bounds and to establish durably hedge rows have been evaluated. Results after three years have shown that Vetiveria zizanioïdes and Andropogon gayanus are growing well upstream stone bounds and establish a very tight line that stabilise stone bounds. Plant regrowth rate, plant growth and spreading, and the biomass are more interesting for these two species despite severe attack of termites. On the other hand, the performance of Vetiveria nigritana is the least and seems rather to succeed in good humidity conditions such as bottom valleys.

The Sahelian zone is confronted with the double problem of temporal and spatial rainfall variability, and soil erosion by high intensity of the rainfall which can reach I30 > 35 mmh-1 (Casenave et Valentin, 1989). The phenomenon is further worsened by an increasing scarcity of vegetation and by soil crusting (Lal, 1997; Morin, 1993). In Burkina Faso, Roose (1981) observed runoff that accounted for up to 40% of annual average rainfall, and considerable soil losses (4 to 8 tha-1/year) despite slopes of under 3%. This resulted in soil low productivity and to weak level of crop yields (Sédogo, 1993).

Soil erosion control has especially put emphasis on the implementation of techniques which allow to the soil to absorb the maximum of rain water (ploughing, mulching, tied ridging, hoeing, etc.), but also by large popularisation of physical measures such as earthen bounds, stones bounds, small dikes, etc (Fida, 1987, Mando et al., 2000). These techniques have shown tangible results and are much appreciated by farmers (Maatman and al., 1998). However, the problem of the work hardness during theirs realisation and the lack of stones in the long term is still actual. Thus, researches are nowadays increasingly centred on hedge rows and grass strips utilisation. When definitively installed, these measures are more durable and need a few up keeping. Andropogon sp. and Penissetum sp. are species which are traditionally used by farmers (Vlaar, 1992). Vetiver grass utilisation in hedgerows to reduce runoff, soil loss and to increase soil humidity is well known in several countries with similar agroclimatic conditions as Burkina Faso (India, Indonesia, Madagascar, Brazil, Australia, Chine, Philippines, Nigeria, etc.). It allows to break the slope length, decrease runoff velocity and increase infiltration opportunity time, reduce the erosivity and transport capacity of runoff, cause the deposition of erosion products, trap nutrients and induce terracing (Wilborts, 1995).

This study aims to evaluate the suitability and adaptability of Vetiveria zizanioïdes to be established in hedge rows, and to evaluate three species capacity to ensure a good fixing of stone bounds and to establish durably hedge rows.

The trial is held in the agricultural research station of Kamboinsé, located at 12 km from Ouagadougou (Latitude north: 12°28; Longitude west: 1°32; Altitude: 296 m).The climate is north soudanian type with a long dry season and a rainy season witch starts in may (Guinko, 1984). The annual rainfall average of the last fifteen years is 750 mm during 6 months (May-October). The rainfall is characterised by a high temporal and spatial variation (figure 1). Average temperatures vary from 24 °C to 38 °C (Somé, 1989). Vegetation is septentrional soudanian type (Guinko, 1984) with species such as Butyrospermum paradoxum, Parkia biglobosa, Lannea microcarpa, Adansonia digitata, tamarindus indica and Acacia albida.

Three stone bounds (SB) have been installed in July 1994 according to contour lines. Their length are 78m for SB1, 118m for SB2 and 142m for SB3. On each diguette (stone bound), 4 treatments are considered:

Lines of plantation are situated 30 cm upstream of the diguette and distance between stumps is 20 cm for all species. Plants have been planted on 27 July 1994. A 2 m interval is left between treatments. The diguettes are approximately 33 m spaced (Zougmoré and al., 2000). The field has been cultivated with peanut.

Measures done during the 3 years of study are :

In the beginning of the 1995 rainy season, i.e., after eight months of drought, plant regrowth rate has decreased for all species. Values obtained are 85% for Vetiveria zizanioïdes, 68% for Andropogon gayanus and 34% Vetiveria nigritana. In 1996, the regrowth was better than in 1995. A planting out has been done in 1995 to replace stumps died during the dry period.

During the three years, Vetiveria zizanioïdes and Andropogon gayanus have shown a good capacity of stumps regrowth (>80 %). On the other hand, Vetiveria nigritana has appeared less resistant to drought with an average regrowth rate of 51 %.

During the first month after planting, plants growth has been slow for the 3 species (figure 4). Then the growth becomes fast during rainy month of august and september before it stabilises in the end of the rainy season. The maximal height 103 days (27-July to 07-November) after planting was 103,5 cm for Vetiver grasses, and 203 cm for Andropogon gayanus. The flowering was realised for all species from the mi-October. The comparison between stone bounds didn’t show important variations of height. In second year, plants height increased appreciably reaching 3 m for Andropogon gayanus, 2,3 m for Vetiveria nigritana and 1,5m for Vetiveria zizanioïdes. The greatest height for Andropogon gayanus and Vetiveria zizanioïdes are obtained on the intermediate diguette while for Vetiveria nigritana, the maximal height is observed uphill the first diguette.

The quantity of dry matter has increased during the first two years, then has decreased in 1996 (figure 6). Andropogon gayanus produced more dry matter than the two Vetiver species. Nevertheless, Vetiveria zizanioïdes biomass production was the double of that of Vetiveria nigritana.

Peanut grain production in 1995 and 1996 has also increased (figure 7). This could be related to soil physical and chemical properties improvement by stone bounds and grass strips. The comparison of the three species concluded that Vetiveria zizanioïdes and Andropogon gayanus suitability was interesting upstream the three diguettes. It was upstream the first diguette that Vetiveria zizanioïdes obtained the best productions of biomass, despite the low rate of soil water content at this zone. On the other hand, Vetiveria nigritana grow better upstream downward stone bound, demonstrating that this specie is more demanding in term of humidity. Indeed, this specie grows traditionally in bottoms and humid zones. The results are similar concerning stumps number and plants height. Following an attack of termites in the beginning of 1995 rainy season, Vetiveria zizanioïdes shoots have been able to resist better than the two other species.

This study showed that among the three tested species, Andropogon gayanus and Vetiveria zizanioïdes was the most suitable for stone bounds stabilisation. On a degraded soil, hedge row fixation have been effective upstream stone bounds only one year after plantation. The two species hedge rows showed a resistance to termites attacks during the dry season so that their regrowth rate at the beginning of the following rainy season was satisfactory. Vetiveria nigritana seems to succeed in good humidity conditions. Because of the multiple domestically uses of these species products by farmers (thatch of hut roofs, matting, straw hat, hangars, etc), a large diffusion of herbaceous hedge rows with these species becomes a primordial objective for local development agencies in order to promote sustainable management of the present limited natural resources in the Sahel. 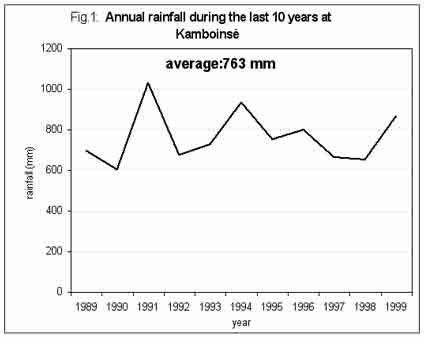 Figure 2: Water content at different distances from stone lines; (a) transect 1, (b) transect 2 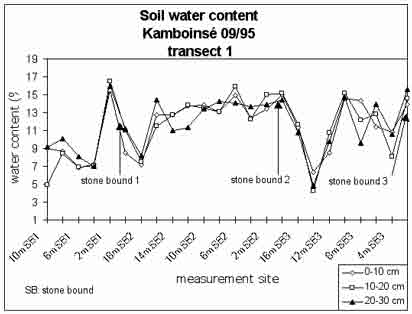